The chances of extraterrestrial life are high and an Israeli defense expert who is claiming aliens have landed on Earth took things too far but shouldn’t be dismissed as a crank, according to the head of Israel’s space agency.

Haim Eshed, who headed Israel’s space security programs for 30 years, has been in the spotlight in recent days, after claiming that aliens exist, that Israel and the US have long been in contact with them, and that Donald Trump was going to blab but the extraterrestrial beings of the “Galactic Federation” stopped him.

Eshed said aliens conduct experiments on Earth, and there is a joint base underground on Mars where they collaborate with American astronauts. “They asked that we don’t publicize they are here because humanity isn’t ready,” he said.

His ideas on space, including on aliens, are outlined in a new book written by author Hagar Yanai, called “The Universe Beyond the Horizon: Conversations With Prof. Haim Eshed.”

According to Isaac Ben-Israel, chairman of the Israel Space Agency, Eshed went too far with his claims, which were published in a interview with the Israeli daily Yedioth Ahronoth, but his seriousness shouldn’t be questioned and his standing as a leader in his field remains intact. “If I would have to choose one person to be called the father of Israel’s space capabilities, it would be Haim Eshed,” Ben-Israel told The Times of Israel on Thursday.

Asked for his own view, Ben-Israel said: “I also think the probability is quite large. Still, in my interpretation, I don’t believe there were any physical encounters between us and aliens.” 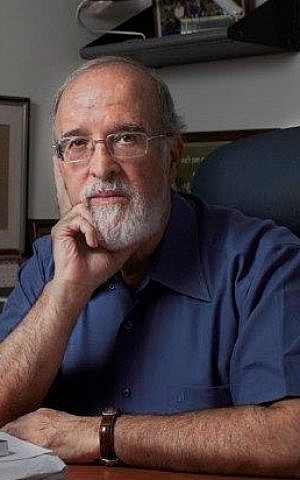 Another Israeli space expert, Dan Blumberg, said that Eshed remains a serious figure, though he has given a “bizarre” twist to a broadly legitimate discussion about aliens.

“I know Haim Eshed well, and have enormous respect for him,’ said Blumberg, head of the Earth and Planetary Image Facility at Ben Gurion University of the Negev. “It’s a viable and legitimate discussion, but it has been taken to a completely bizarre place by the article.”

While jokes have been made questioning the state of octogenarian Eshed’s mind, Ben-Israel said he has been talking about aliens for decades, and it never compromised his academic integrity. “I’ve known Haim Eshed for 40 to 50 years, and he was always a visionary and very creative.

“Without his capacity for long-term vision you couldn’t have dreamed Israel would be one of very few countries with independent space capability,” he said. “But sometimes creativity comes with ideas that are not accepted by others. One of these relates to UFOs and intelligent extraterrestrial creatures.”

He thinks that Eshed arrived at his theory invoking real information, including records of non-coherent signals from space, but interpreted it wrongly.

“There is a lot of information gathered by Americans and it’s a matter of interpretation,” said Ben-Israel. “Most people including myself interpret everything reported as natural phenomena; some people interpret it as something different. If you have a very creative mind, you push toward the second option.”